You are here: Home / Blog / Tiramisù – The Dessert of Lovers

From the Thoughtful Foodie

It was news to me to find that this popular dessert has such a naughty past. This innocent dessert as we know it is made of Ladyfingers or Gunz Piacelli Boudoir Biscuits dipped in espresso and or coffee liqueur and then layered in a decadent mix of whipped cream, mascarpone cheese and sugar and yet more alcohol.

The town of Treviso.

Tiramisù or sbatudin as it was originally known was prepared daily within the walls of many a house of ill repute in the beautiful town of Treviso in the Veneto region of Northern Italy during the 1800’s. Across it’s ancient palazzos where so many brothels existed, today Treviso is known for its pretty canals and narrow cobbled streets, but it apparently has many a secret to tell.

Even if many of the tales of erotic Treviso are the figments of an imaginative past the names surrounding the dessert are certainly a give-away to its origins. The translation for sbatudin is “give me a shake and bang me” whilst tiramisù means “pick me up, pull me up or pull it up”. Casino is another word used during the period that is roughly translated as a building used for social amusements. It is said that visiting a brothel or a casino was something of a status symbol and that if a gentleman didn’t turn up to take part in a tiramisu and sex ritual he was snubbed by his counterparts. 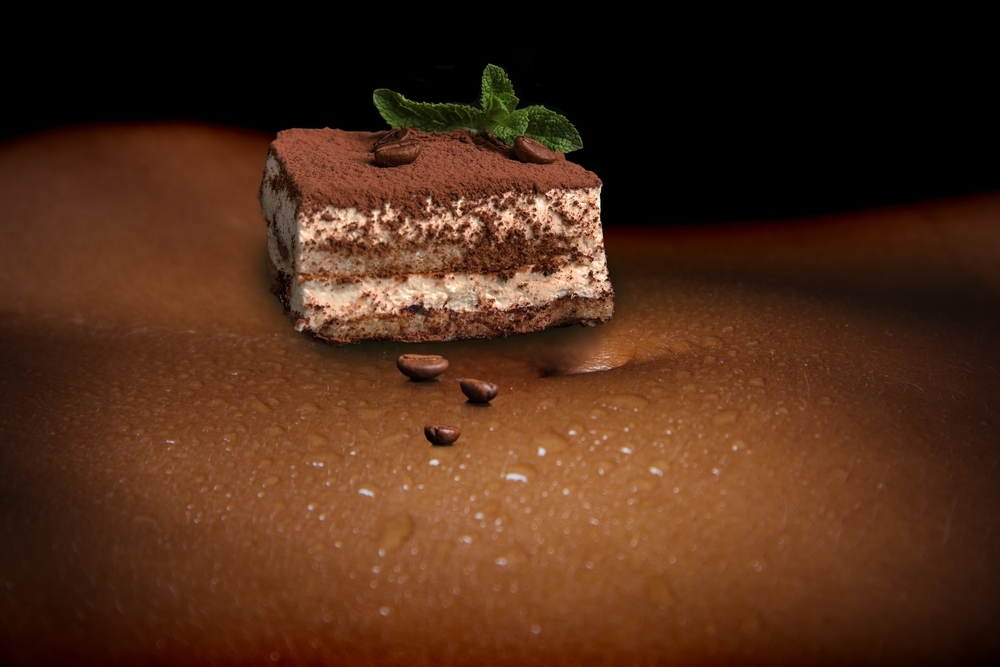 This is more than a simple dessert or pick me up. In it’s original form, the sbatudin, was made of whipped egg yolk and sugar, a concoction that has been fed to Italian babies for many years to grow strong children. Young mothers and the old alike would say it was so good at rejuvenating the spirits it could raise people from the dead. It’s long been known for it aphrodisiac effects; thus, a natural form of Viagra was born.

There seems to be two versions of the evolution of Tiramisu. In the first sbatudin evolved into tiramisù as travelling merchants gifted the sex workers with coffee (the caffeine would have worked wonders), mascarpone and ground chocolate. Noblemen and wealthy merchants would be entertained to long lunches filled with anticipation for the Tiramisu to be served which signalled the time to move to the pleasure domes of sex filled pleasure. In the other version, the owners of the brothels developed this aphrodisiac dessert to both thank the leaving customers and to reinvigorate them should they need to perform their conjugal duties once home.

Times moved on and in 1958 the government closed the brothels down but during the 1960’s the owners of a tavern called Le Beccherie decided that even if the pleasure palaces were gone tiramisù could not be lost and added this to their dessert menu. Today that same restaurant can be found along a cobbled street on the Piazza G. Ancilotto and the pleasure domes do still exist apparently, to those who know where to find them. 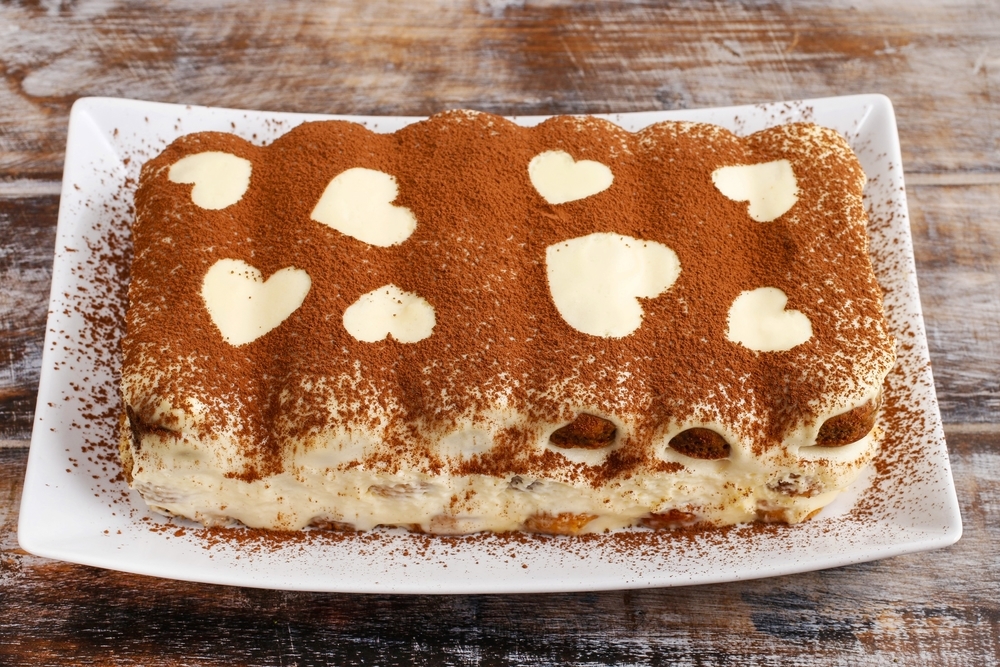 So the next time you eat a tiramisù dessert and feel just a little more sensual and seductive you are in good company and you can cast your mind back to Italy’s sexy kingdom.

Then get into the kitchen and whip up this delectable dessert, present it to your love and see what happens.

So, for those of you who might shy away from ever doing any baking, this 15-minute version of tiramisù is so easy and a really impressive looking dessert. Especially if you pipe the last layer of cream onto the dessert before it’s dusted with cocoa powder. The more traditional way of making tiramisù is to make a whisked zabaglione base which is time consuming, and this I believe is equally delicious.

450ml strong espresso coffee at room temperature (if you want a truly boozy dessert you can add a tablespoon or two of Kahlúa Coffee Liqueur or Grand Marnier but reduce the amount of coffee by the number of spoonful’s of alcohol you have added). 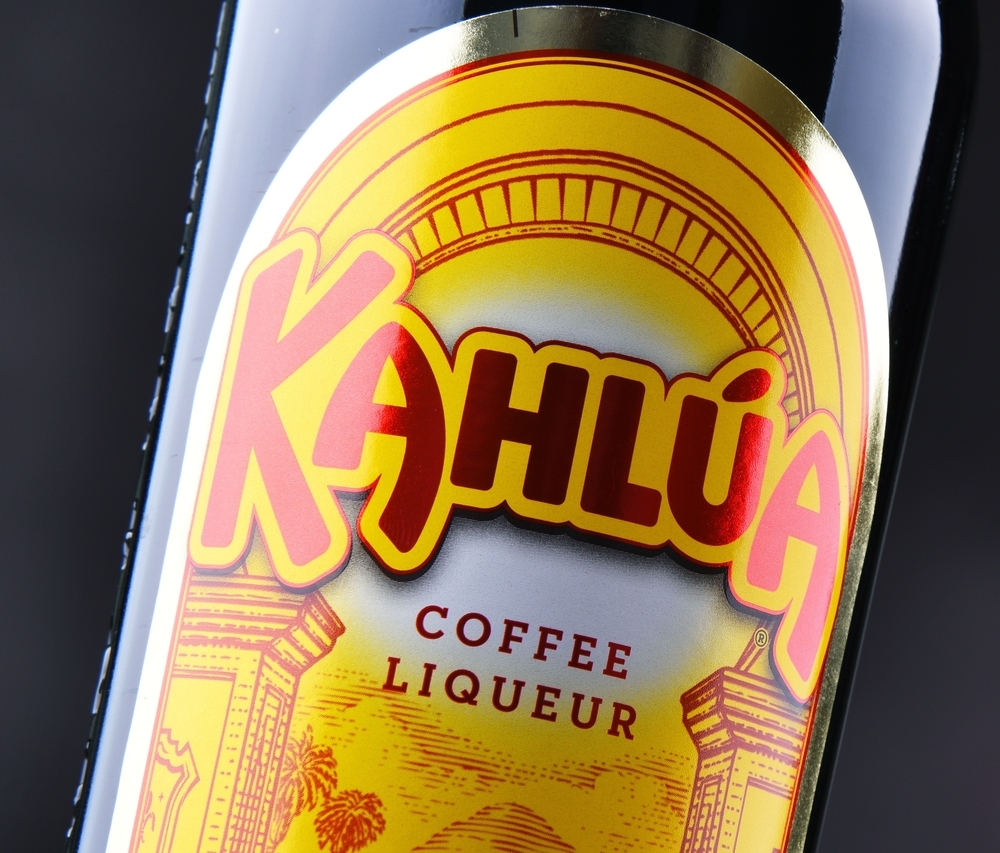 30g – 45g sugar depending on how sweet you like things to be.

1 – 2 (depending on taste) tablespoons Kahlúa Coffee Liqueur or Grand Marnier.

1 pack of Ladyfingers, they also go under the name of Boudoir biscuits or Savoiardi, bought from your supermarket or online.

Unsweetened Cocoa powder for dusting the top of the dessert.

*If you would like to know how to pipe the final layer of your dessert go to https://www.youtube.com/watch?v=FecDIPGI0-c for some techniques.
* The Alcohol can be removed from the recipe if its not preferred.